Paneer Kali Mirch recipe is a delicious onion-curd-based gravy dish made with paneer. You will easily find this recipe on the menus of some North Indian restaurants.

When served with Roti or Phulka, the gravy has subtle hints of Kali Mirch. Curd present in the gravy provides a faint sour taste while also balancing the pungency of the black pepper. The fried onion paste adds a sweet note to the gravy and helps in producing a thick gravy.

Cubes of paneer are tossed in a creamy sauce seasoned with freshly ground black pepper.

Because we use a lot of black pepper in this recipe, you might think it’s spicy. But honestly, it’s hot, but not at all scorching hot. Paneer Kali Mirch has just the right flavors to enjoy the flavor of black pepper without it overpowering the dish.

For preparing this recipe, I highly recommend using freshly ground black pepper. Only with the freshly ground black pepper, you can enjoy the real flavor of Paneer Kali Mirch. I tried to balance the spiciness of black paper with fresh cream, which also gives it a Punjabi touch much liked in north India. But you can also use coconut milk you love to enjoy south Indian flavor.

Aside from the peppercorns, the recipe also calls for cashews, cream, and yogurt to make it creamy and tangy.

So, here is a paneer recipe to try today if you are looking for some new flavor at your home. I am confident you will not be disappointed at all. 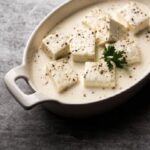 How to Cook Paneer Kali Mirch